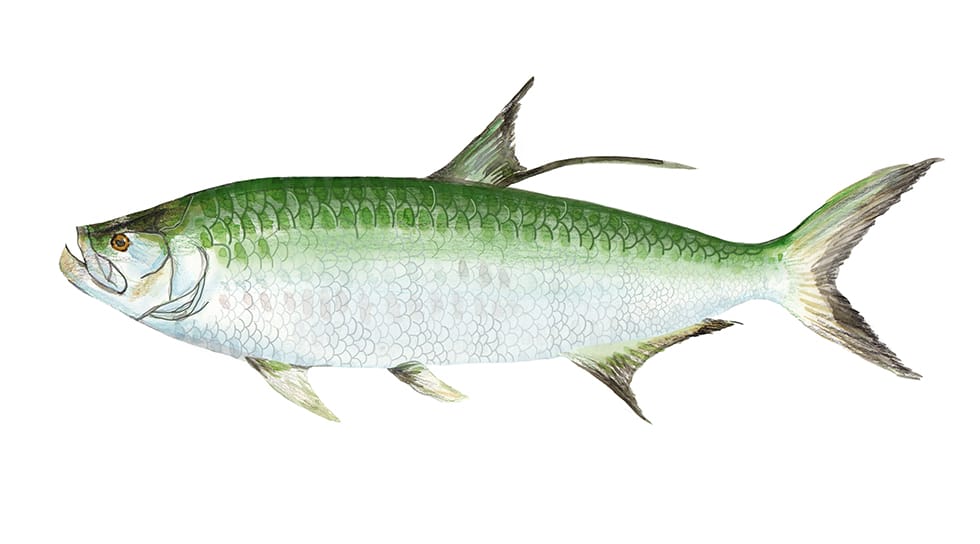 The mighty Tarpon is one of the biggest and toughest fish you can tangle with in these waters, outside of Monster Sharks. A great challenge for moderate to advanced anglers, Tarpon can be found in both inshore and nearshore waters.

The peak season for Tarpon is July to mid-September. Because they prefer warm, tropical waters and can even die in water under 50 degrees, they head south to Florida waters as soon as the water temperature begins to drop in early fall.

While it’s an awesome sport fish and a lot of fun to chase, Tarpon isn’t considered a very good fish to eat. It is legal to keep, but we almost always catch and release.

Where to Find Tarpon

In season, Tarpon go wherever they need to hunt fish throughout inshore and nearshore waters.

How to Catch Tarpon

Bait: Small fish such as striped mullet, menhaden, as well as shellfish such as crab or Shrimp, all make great bait. You want to catch it fresh before you chase the Tarpon.

Approach: Cast your line just as you would when chasing any large fish, but be prepared for a fight when Tarpon fishing. The Tarpon is a strong fish that can drag a GPS-anchored boat and jump up to six feet out of the water while it resists your reel. Landing a Tarpon is always a thrill!

Tackle: Hilton Head Fishing Charters will provide all the tackle and gear you will need to ensure a successful and productive Tarpon experience.