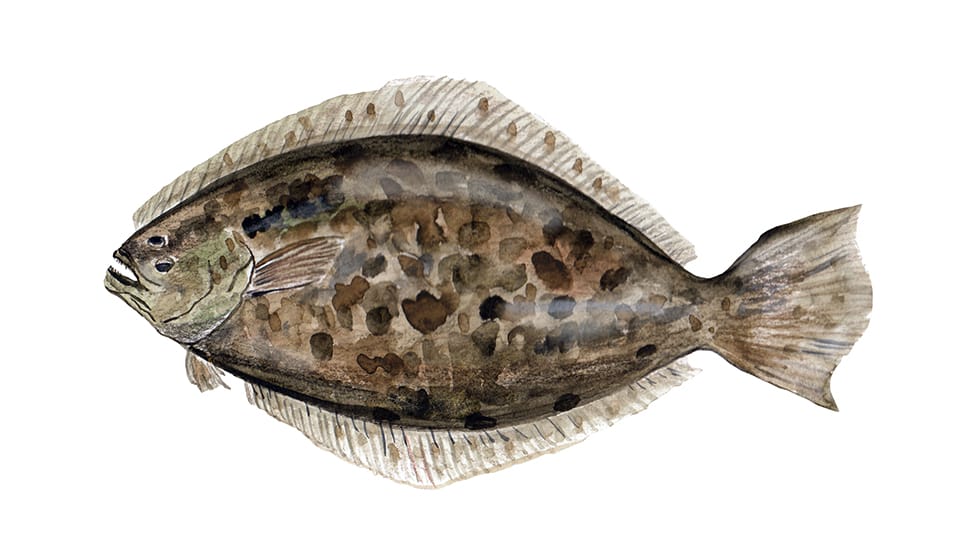 The Gulf Flounder is an odd, and aggressive flat fish with ferocious teeth and an aggravated personality. It swims along the bottom of inshore waters on its eyeless right side, both eyes on the left watching for its prey. Mud brown in color, the Flounder is a fairly unattractive yet very tasty fish.

Flounders are coldwater fish that tolerate the low salinity (amount of salt in the water) of the rainier season. This makes them most abundant in Hilton Head from September to April.

One of the reasons Flounder is popular for eating is that it’s known for being nutrient-rich, protein-dense and low in fat. It has a fairly mild, sweet taste often compared with tilapia.

Where to Find Flounder

Flounders lie in wait on the sandy bottoms of inshore waters, ready to pounce upward, lightning-quick, on unsuspecting fish with jaws full of sharp teeth.

How to Catch Flounder

Bait: Small croaker, mullet and other small fish are good options for live bait, but strips of meat from bluefish, squid and Trout meat can also work well.

Approach: Cast a line just as you would when going after other popular catch like Redfish and Trout. If you’re in the shallows with your bait near the bottom, there’s a good chance you’ll pick up a surprise Flounder as well.

Tackle: All you need is a standard rod and reel with a weighted circle hook or fly lure when Flounder fishing, though fly fishing for bottom feeders like this is challenging.

You can keep up to 10 Flounders (Gulf, Southern or Summer Flounders - all pretty similar) per person per day, not to exceed 20 per vessel per day, with a 15-inch tail length limit.